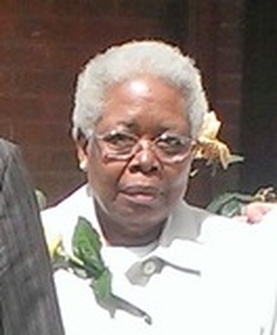 
On the Sunday after Carmen passed away so unexpectedly our Church Secretary, announced the news in church as she always does.

After the service a newer member of the congregation said to me “I didn’t quite catch the name of the lady who has passed away, could you tell me who it was?”

I did so but seeing she was still puzzled I said “ she used to sit over there….” And she immediately said “Oh, yes, I know, you mean the small, quiet, smiley lady with the glasses” ….. and I think that is exactly a description of Carmen that many of us could identify.

I don’t remember exactly when Carmen first came to the Church but she was a member of the wider church for a long time before she joined us and then became a member here on the 18th August 1985, 31 years in the summer.

The fact that I can’t remember when she first came isn’t so much due to a poor memory on my part but more because Carmen is one of those people who always seems to have been here, attending meetings, social events, outings and going about her work for the church in a quite but purposeful way. I don’t think, in all the years we knew her I ever heard her raise her voice or even laugh out loud – however heartily she laughed it was usually like this …

Another thing I recall about Carmen was how polite and encouraging she was – she often thanked people who read the Bible in church and the Singing Group when we contributed to the service. She was always interested in our families and often asked what they were doing now.

In 1994 Carmen took on more responsibility and became an Elder, which she still was until she passed away. Carmen’s faith was very strong and important to her and she knew her Bible well but being an Elder isn’t always easy and in recent years we have faced many challenging issues as society changes and although she was quite opposed to some of the new ways of thinking she would simply say quietly “ I don’t agree with that…and I will never vote for it” and we knew there was no point in trying to convince her otherwise.

Over the years she participated fully in church life, just a few of the things she attended, or helped at were the Women’s Meeting, the Community Lunches, she cooked for the Caribbean Lunch club, attended the Day Centre, the Wednesday Lunch Club, and she always got real enjoyment from the Outabout Club.

One of her greatest contributions to the church was as Communion Steward – preparing and looking after the Communion Table, the white cloths, the silver etc. She took great pride in being Communion Steward, which she was for 30 years.

During her years as a member of the church we have had three ministers, Revs Peter Loveitt, John Campbell and now, Peter Little and as we all know, Carmen did love her Ministers and frequently would quote things they had said to her or asked her to do.

She was devastated when Peter Loveitt passed away a few years ago and I’ve had a message from Simon on behalf of the family, to say they have very happy memories of Carmen. We are pleased that John Campbell is here with us today and her current minister, Peter Little, is conducting her funeral service. I think Carmen would have been very content with all that.

She would also be delighted that Delroy Brown has managed to join us as she always took and interest in him and his family and his rising profile on Television.

She was passionate about flowers and loved her garden. She was delighted when, in 2014, our minister invited her to be one of the people to plant poppy seeds in the garden outside to commemorate the First World War.

In the last couple of years life became more difficult for Carmen with increasing health problems and she wasn’t quite as able to do the things she enjoyed so much but she still loved her garden, and still proudly showed us pictures of her much loved family on her mobile phone.

On the Sunday before Carmen passed away she really was like her old self – she was smiley, chatty and quite animated which is why everyone was so shocked when we heard the news.

Whatever your memories of Carmen are, many of you will always remember her, as I do, as others do, as the small, quiet, smiley lady with the glasses and I don’t think she would mind that description at all…